WhatsApp phone-less feature finally announced; how to get it now – just do this

The day is finally here. WhatsApp has just announced its phone-less multi-device support. It is something that every WhatsApp user has been eagerly waiting for. So, even though WhatsApp is the most widely used encrypted messaging service in the world with over two billion users, but the service has always lagged behind rivals in one important aspect — multi-device support. It left users quite disappointed. The Facebook-owned company has been working on that aspect for a while now and has finally begun testing multi-device support that will allow users to connect up to four devices including WhatsApp Web, WhatsApp Desktop and Facebook Portal.

WhatsApp phone-less feature: While users could connect to other devices in the past, their phone would need to be connected to the internet all the time. Any break in connection meant that the user went offline. Very frustrating, indeed! With the new multi-device beta that is now underway, the company is almost ready to allow users to use WhatsApp independently of their smartphone – the primary device.

WhatsApp phone-less feature in beta mode: The new multi-device support is being tested in a limited public beta that began rolling out on Wednesday, the company said.

WhatsApp phone-less feature takes on rivals: The new multi-device support gives WhatApp the same capability as its rival, the private and open-source encrypted Signal messenger, which also allows users to connect additional desktop clients to their mobile app. However, both services cannot currently link another phone, something that rival service Telegram already offers.

Here’s what you need to know about the new WhatsApp multi-device mode that is currently in beta testing on Android and iOS devices:

When using the older system of connecting WhatsApp Web, WhatsApp Desktop and Facebook Portal to a smartphone, the company says that the service suffers from issues like slower performance and frequent disconnections. It can also drain the battery and users might also miss messages because the app gets killed in the background. Similarly, once multi-device support is enabled, companion apps can finally handle calls and video chats, while users simultaneously check their messages on the phone, the company says. 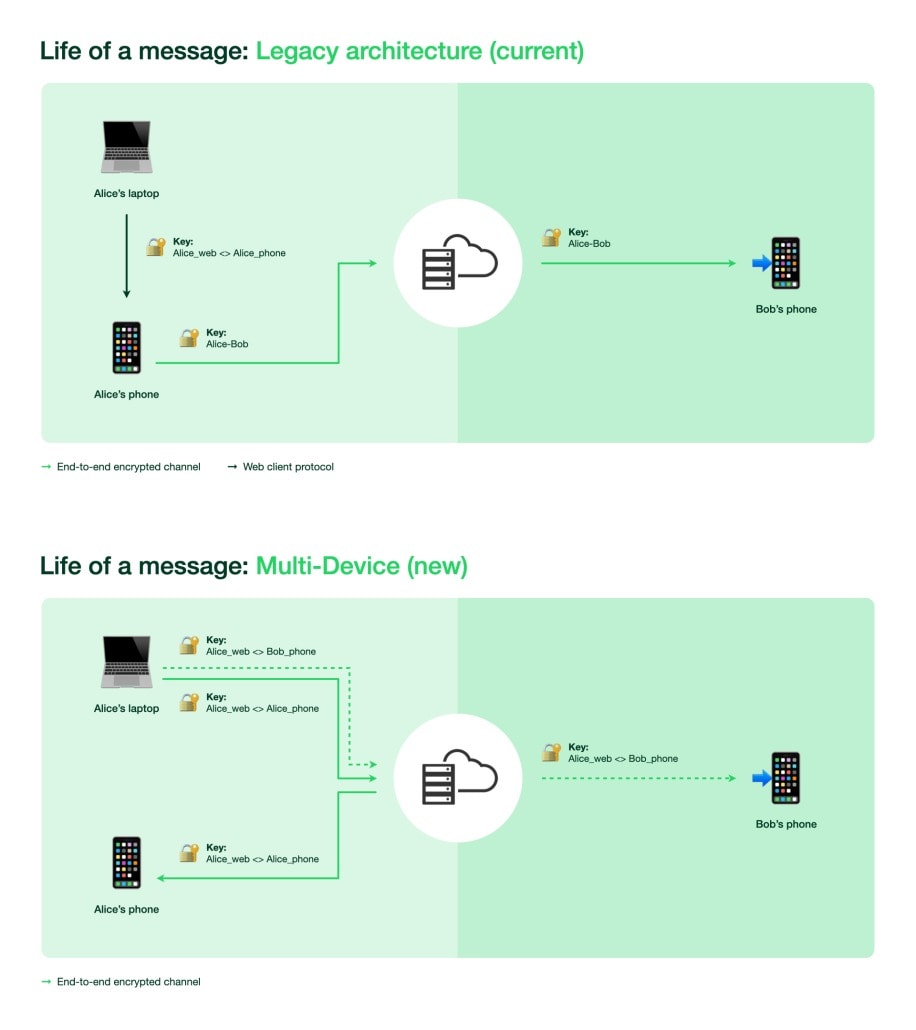 What about WhatsApp end-to-end encryption with multi-device support?

One of the biggest questions users might have about the new multi-device support is whether end-to-end encryption will work properly — the company says it has developed new technologies to ensure that the messages are able to sync across multiple devices, while maintaining end-to-end encryption — something only Signal has been able to manage so far when it introduced support for desktop apps nearly four years ago.

“To achieve this, we had to rethink WhatsApp’s architecture and design new systems to enable a standalone multi-device experience while preserving privacy and end-to-end encryption. Each message is individually encrypted using the established pairwise encryption session with each device. Messages are not stored on the server after they are delivered,” the company states.

WhatsApp says that it does not have a specific date for the final release of the new multi-device support for all users, but the company has begun testing it among a limited number of users that are running the latest beta versions of WhatsApp for iOS and Android. Users can attempt to sign up for the beta version of the app using our handy guide here, or wait for a couple of months, when the company plans to slowly begin testing the feature with a small number users who are running the stable version of the app.