NEW DELHI: Auditors of companies overseen by the National Financial Reporting Authority (NFRA) will need to disclose their findings separately as the government looks to address audit-related concerns and step up transparency.

The government is set to notify a new form that will require auditors to file key findings in respect of companies and any adverse comments and observations, among other details. The proposed disclosure form is designed along the lines mandated by the Public Company Accounting Oversight Board in the US.

“The government will shortly be notifying the form by which the auditors will have to file annual reports to NFRA,” a senior government official said.

The move was prompted by cases including the scam at IL&FS that revealed severe shortcomings and raised questions over the quality of audits and management interference.

The authority, set up on October 1 last year, is responsible for the oversight, establishment and enforcement of accounting and auditing standards and the quality of service of auditors, taking away oversight authority for such companies from the Institute of Chartered Accountants of India.

Auditors and audit firms would be required to mention findings and observations regarding the accounts of companies under NFRA’s watch, the official said.

The government’s view is that separate filings would allow greater transparency and ease of access to audit findings.

Policymakers have been deliberating on increasing disclosures for auditors for some time. The ministry of corporate affairs has initiated debarment proceedings against nine auditors, alleging collusion with the management of IL&FS in concealing financial irregularities. 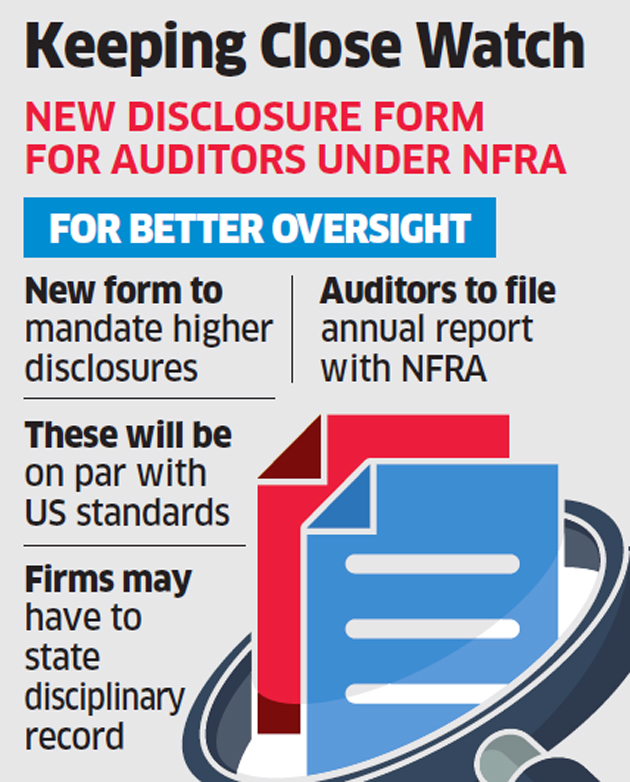 The US requires annual disclosures by auditors, including lists of companies audited and details of any past disciplinary action against members of the firm. They must also disclose their risk assessments of companies.

The government wants to replicate these practices in the country as part of the move to address concerns stemming from recent corporate frauds.

If NFRA follows the US model, it is likely to use the disclosures by audit firms to select cases for further review, a partner at a leading audit firm said on condition of anonymity. He added that auditors would welcome the adoption of US standards.